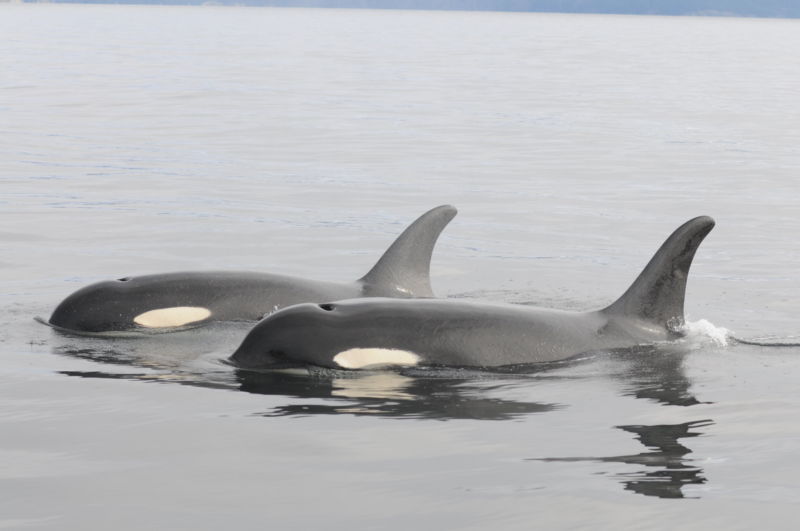 There’s a rare human trait that doesn’t often make it into debates about what makes our species unique: menopause. Humans are among just a handful of species where females stop reproducing decades before the end of their lifespan. In evolutionary terms, menopause is intriguing: how could it be advantageous for reproductive ability to end before an individual’s life is over?

One possible answer: the power of the grandma’s guidance and aid to her grandchildren. A paper in PNAS this week reports evidence that supports this explanation, showing that killer whale grandmas who have stopped reproducing do a better job of helping their grandchildren to survive than grandmothers who are still having babies of their own.

It’s not all about the babies

The engine of evolution is offspring. In simple terms, the more babies you have that survive, the more your genes are passed on, and the better the chance of the long-term survival of those genes.

But there are other ways to improve the long-term survival of your genes, and that’s where evolution gets a little bit more complicated than just brute-force reproduction. If you invest in your siblings’ children, or your children’s children, you also improve the survival of the genes you share with them. Like every other survival problem that a species must overcome—food, safety, finding a mate—the dynamics of natural selection generate different solutions to the question of how to propagate your genes.

The “grandmother hypothesis” suggests that grandmas play a crucial role in the survival of their grandchildren, which obviously gives the grandmas’ own genes a boost. But that doesn’t explain why humans—along with killer whales, short-finned pilot whales, belugas, and narwhals—stop reproducing with decades left to live. Wouldn’t it be better to just keep having babies of your own and help your grandchildren? Possibly not: in certain species, with certain family dynamics, evolutionary models show that it’s more worthwhile for grandmas to invest all their resources in their grandchildren, rather than compete with their own daughters.

Grandma has tricks up her sleeve

Like humans, killer whales live in intensely social family groups. Also like humans, young killer whales need help finding food even after they’ve been weaned. This means an important role for grandmothers, who can share food with their grandchildren and also impart their decades of accumulated experience and wisdom by guiding their families to historically successful feeding spots.

To test whether post-reproductive killer whale grandmas improve the survival of their offspring, a group of researchers collected data on killer whale populations off the coast of Washington state and British Columbia. They tracked the interactions between hundreds of individual whales, recording births and deaths and controlling for the all-important environmental factor of salmon abundance.

Just like humans, whales can become grandmothers while they’re still having babies themselves. Because they were interested in the effects of menopause, the researchers wanted to compare the effects of grandma whales that had stopped reproducing to those that were still having their own offspring.

The results showed that grandma whales played a significant role in the survival of their grandchildren. Survival rates dropped sharply for whales that had recently lost a grandmother—even adult whales of 15 or 20 years old. And this effect was more marked when the grandmother was no longer reproducing herself. It was also more extreme when salmon abundance was lower, suggesting that the ecological knowledge of grandmother killer whales is a crucial resource for their families.

This result ties in well with previous evidence on menopause in killer whales, which found that menopause meant a reduction in competition for resources between grandmas and their daughters.

Grandmothers with their own calves, the researchers suggest, might be more constrained in how much they’re able to offer leadership to their family groups. And when they’re lactating, they will simply need more food for themselves, reducing how much they can share with their grandchildren. Behavioral studies could help to figure out precisely how interactions change between breeding and post-reproductive grandmas.

With salmon populations declining, the researchers write, the role of grandmothers may become increasingly important in killer whale family groups. It’s a neat example of a delicate ecological balance that we’re only just starting to understand.