Where do Space Force and Space Command fit into the Pentagon’s cyber plans?

The Pentagon is trying to determine how its two newest space entities – Space Command and Space Force – will fit into the Department of Defense’s cyber architecture.

There are no plans – or subsequent authorities – for Space Force to provide personnel to the cyber mission force, which feeds up to U.S. Cyber Command, a Space Force spokesperson told C4ISRNET. The way the cyber force is staffed within the Defense Department is that each of the services are responsible for providing a set number of teams – offensive, defensive and intelligence/support teams – to the joint cyber mission force.

In turn, these teams are led by a Joint Force Headquarters-Cyber, which are headed by each of the service cyber component commanders, who then plan, synchronize and conduct operations for the combatant commands they’re assigned to. 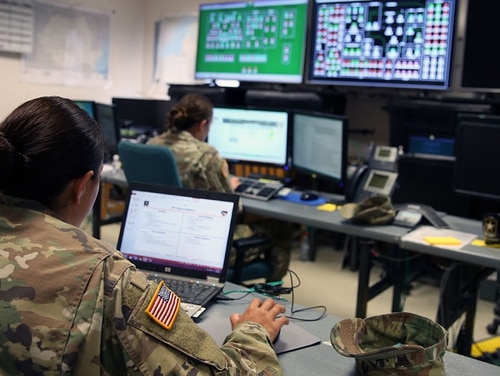 But Space Force will not be totally without cyber forces. As Air Force Magazine previously reported Space Force is considering transitioning about 130 cyber officers and around 1,000 enlisted personnel for cyber. A Space Force spokesperson told C4ISRNET these staffers will be Air Force cyber personnel transitioning in fiscal year 2021.

This staff will be organic to Space Force and focused on defensive operations for space and space systems, separate from the joint cyber mission force.

A Space Command spokesperson added that the possibility exists for future consideration of the service providing cyber mission force personnel as the service solidifies its organizational structure.

When it comes to Space Command, Joint Force Headquarter-Cyber Air Force will be responsible for supporting cyber operations. This will be in addition to already supporting European Command, Transportation Command and Strategic Command.

A Cyber Command spokesperson said the organization is working with Space Command, the Joint Staff and the Office of the Secretary of Defense on future alignment of cyber mission force personnel to support the addition of Space Command.

A spokesperson from 16th Air Force/Air Force’s Cyber said it is unknown if this support will come in the form of teams focused on offense, defense or both. The spokesperson added that Defense Department leadership is reviewing resourcing options for the additional support requirements for Space Command.

It is unclear if the addition of supporting Space Command to the other three combatant commands will strain current resources, but the spokesperson said AFCYBER sent an estimate in response to a Cyber Command planning order.