Nissan flew me to LA and provided two nights in hotels for this story. Instead of flying home, I drove to Palm Springs to drive a new Mazda.

Depending on what you read, you might think it’s impossible for car shoppers to buy anything other than crossovers. Whether you regard them as hatchbacks with Cuban heels or mini-SUVs, there’s no denying that Americans have embraced this latest automotive form factor with gusto. “Why can’t we still have sedans,” the Internet asks. “And make them cheap while you’re at it,” it demands. Well Internet, Nissan has been listening—meet its latest Sentra sedan, which goes on sale in late January starting at just $19,090.

America might be giving up on the sedan, but it’s a body style that has been kind to Nissan over the years—it has sold more than six million Sentras since the nameplate first appeared 38 years ago. The company says that compact sedans are still the third-largest market segment here in the US, hence spending the money to develop what is now the eighth-generation Sentra, now on an all-new platform.

Just one engine and transmission

There’s just a single choice of engine and transmission on offer—a 2.0L naturally aspirated four-cylinder gasoline engine that first showed up under the hood of the Rogue Sport crossover. It delivers 149hp (111kW) at 6,400rpm, and torque peaks at 146lb-ft (198Nm) at 4,400 revs and is married to an Xtronic continuously variable transmission that drives the front wheels. A larger-capacity, naturally aspirated engine bucks the trend these days toward small, turbocharged four-cylinder engines, but Nissan says that not only does it boast 20 percent more power and 17 percent more torque than the old Sentra, it’s also more efficient. For the record, the S and SV trims are EPA-rated at 33/29/39mpg (combined/city/highway), and the SR comes in at 32/28/37mpg.

The new Sentra platform marks a switch to independent rear suspension to go with the McPherson struts up front. And the handling benefits from Nissan’s Intelligent Trace Control, which can brake an individual wheel to quell under- or oversteer and keep the car headed where the driver is steering. The brakes also play a part in the car’s Active Ride Control; this uses tiny brake applications that aren’t enough to decelerate the car but do help the dampers reduce the vehicle pitching over bumps.

The Sentra’s driving experience is competent if not outstanding. The steering—a new electric setup featuring a dual-pinion rack—is a lot heavier than you’d expect for a car that weighs just over 1.5 tons. It’s not quite as bicep-busting as the steering in the current Maxima—the last time I drove one of those I thought the power assistance was busted. By contrast, the pedals are remarkably light, with very little resistance at all to the accelerator.

The ride is comfortable, and the suspension feels sure-footed, but the steering in particular discourages you from attacking a road with the kind of brio you would in the Mazda 3. Added to that, the engine is noisy above 4,000rpm, and venturing into the upper end of the rev range doesn’t add speed that quickly, so it’s not really a car you’ll want to drive at the ragged edge. The car’s biggest weakness is probably the CVT gearbox. Although Nissan has programmed it to simulate actual gear shifts, even in low range there isn’t enough engine braking, and you can’t help wondering if it would be a better vehicle with either a conventional torque-converting automatic or even a six-speed manual. 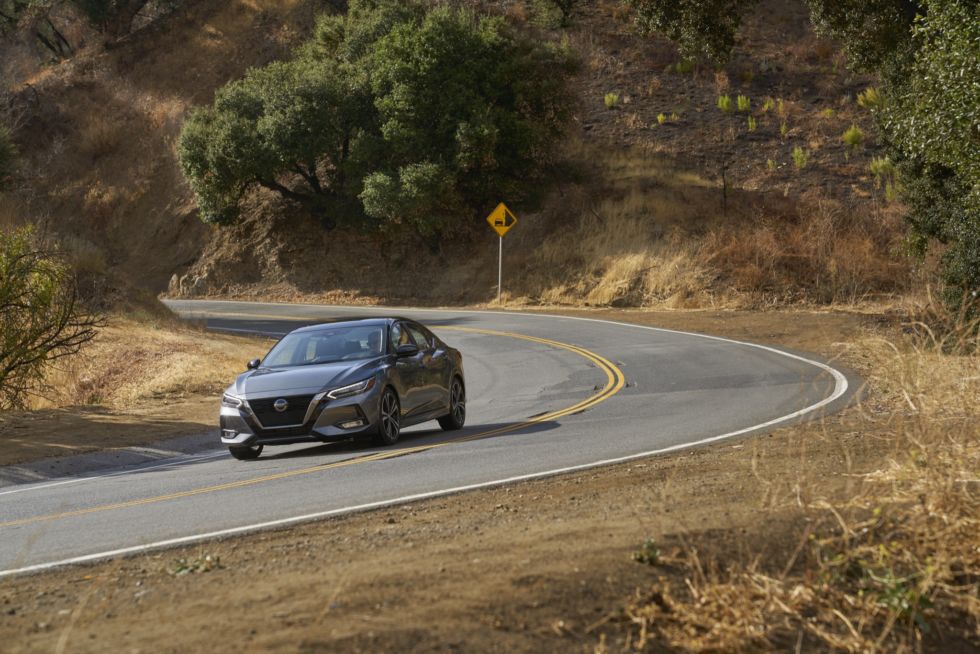 Enlarge / The ride is smooth, and road-holding feels secure, but heavy steering and that CVT let it down as a driver’s car.
Nissan

Nissan told us that it wants the new Sentra to have a class-leading interior. It looks great when trimmed in a lighter color like the tan leather featured in some of the interior images above; in black it can feel a little somber, even with orange contrast stitching. Some of the dashboard plastics are quite hard, but it’s still a pretty good effort even if it’s not quite on par with the (slightly more expensive) Mazda 3 sedan. The front seats are Nissan’s Zero Gravity design, which try to keep your spine posture the same as someone floating in space—they are indeed a comfortable place to spend a few hours.

Even the $19,090 Sentra S comes with a suite of advanced driver assists, packed together and called Safety Shield 360. This includes automatic emergency braking (with pedestrian detection), rear AEB, blind spot monitoring, rear-cross traffic alerts, lane departure warning, and high-beam assist. The Sentra SV is $20,270 and adds adaptive cruise control (but not ProPilot Assist) along with bigger 16-inch wheels and a better 8-inch infotainment system (plus Android Auto and Apple Carplay), more USB ports (including a USB-C port), dual-zone climate control, and remote engine start, among other upgrades. You can also add a Premium package that brings the MSRP to $22,730; this adds quilted leather to all the seats, heating to the front seats, and eight-way power adjustment for the driver’s seat, 17-inch wheels, a moonroof, and different LED headlights.

We only tested the 8-inch infotainment system, which neither stands out as exceptional nor abominable. It’s a touchscreen UI, but with physical buttons for the most-used functions, and the same UI as you’ll find in other Nissans like the Leaf. Be warned—there is no built-in navigation, so if you need directions to where you’re going, you’re going to want to use Android Auto or Carplay.

The SR, which costs $21,430, is the sportier trim and boasts 18-inch wheels, LED headlights, and orange contrast stitching on the interior. Add the SR Premium pack—$23,600 plus delivery charges—and you get the heated front seats, the power driver seat, the better LED lights, 360-degree parking cameras, a Bose sound system, and Prima-Tex seats instead of leather. That makes the Sentra quite a bargain if you’re looking for a fully loaded sedan for not a lot of scratch.