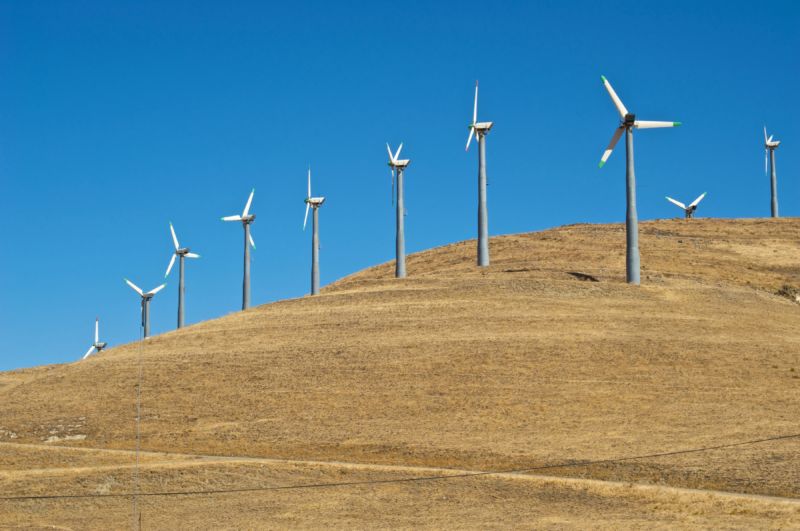 The rapidly increasing amount of intermittent power sources on the electrical grid raise questions about how best to make sure a variable supply gets power to consumers when they need it. One idea that has been suggested is what’s called “demand-response pricing”—charging more for electricity when demand is high in order to shift some of it to other times. If people or companies are made aware of the high price, they can choose to forgo power-intensive activities. Or, with smart appliances, even set them to automatically avoid high price periods.

In theory, if enough people turn down their air conditioners or postpone their laundry, demand can drop enough so that a variable supply can meet it.

Right now, our grid isn’t set up for variable pricing; consumers pay a flat rate regardless of how plentiful or scarce the electrons are. But there are plans to make it a regular feature in some areas and a few test cases of variable pricing. Researchers who tracked one of the tests found what may be a significant problem: the most vulnerable populations, like the elderly and poor, tended to end up paying more and having increased health problems.

The motivating principle behind demand-response pricing is that demand is flexible. People can put off running their clothes dryer, or put up with a few hours of somewhat warmer temperatures. But that’s actually not true for everyone. The elderly and disabled, for example, may not tolerate even a few hours of elevated temperatures or could have medical equipment that simply can’t be shut down. This could also hit the poor harder, as they tend to live in housing with less efficient appliances and poor insulation.

To find out whether there was any evidence that this sort of uneven impact was taking place, researchers Lee White and Nicole Sintov tracked a trial run of demand-response pricing. The trial took place in an unnamed utility in the US Southwest during summer. Because of the heat, there tends to be a spike in demand as people get home from work and turn on the air conditioning. To lower this demand, the utility raised the price of electricity used during this peak, offering two different plans. One simply had elevated prices for the whole period where demand was elevated; the second used even higher prices but limited them to a shorter period at the time of highest demand.

To figure out how this affected vulnerable groups, the researchers got thousands of the participants to fill out surveys regarding their experience. That may be a source of bias in the results, as the authors note this selects for people who have the time to handle the surveys, which may affect the most vulnerable more severely. In addition, things like medical problems and experiencing uncomfortable heat were determined by survey responses. Thus, these answers could be affected by subjective experience or poor recollection.

Those limitations aside, the high survey response rate and large population provide a bit of confidence in the data.

Hitting where it hurts

The researchers used the survey responses to identify a number of potentially vulnerable groups: those with children, the poor, the elderly, and the disabled. They then used utility data to find out what they ended up paying and survey data to determine whether they had health issues during the time the demand-based pricing scheme was being trialed. The data allowed them to analyze each group individually, comparing it both to customers using the flat-rate pricing and to the other customers in the trial.

One of the key conclusions of the trial was that everyone who tried demand-based pricing ended up paying more. This isn’t a problem with the concept but, rather, is an indication that the utility didn’t set up a consumer-friendly pricing structure for this trial. That’s something that utilities may want to be cautious about if they don’t want these schemes to pick up a bad reputation ahead of wider rollouts.

But, by comparing groups of people who were all on the scheme, it was possible to identify those who ended up paying more than others with the same pricing setup.

The results confirmed some of the worries. The elderly and disabled ended up paying more than others under the same pricing scheme. (Households with children saw no significant change.) On the plus side, the lower-income households managed to use the policy to cut down on their costs relative to others on a similar pricing setup. Not surprisingly, however, they reported increased discomfort during the period of the test, presumably because they ran the air conditioning less often.

When it comes to any physical consequences of that sort of change, the results were mixed. Those with low incomes or disabilities reported seeking medical attention for heat-related issues more often than others using demand-based pricing, but people with children reported that being needed less often.

The other thing that was notable was that there were subtle differences between the two pricing plans. The authors interpreted this as suggesting that a carefully designed rate might minimize the impacts on vulnerable populations or be used to direct the impacts to the groups who can most afford it. In either case, the data suggests we need to be cautious about rolling out this approach to handling mismatches between supply and demand.