Jumanji: The Next Level is less fresh this time around but still lots of fun 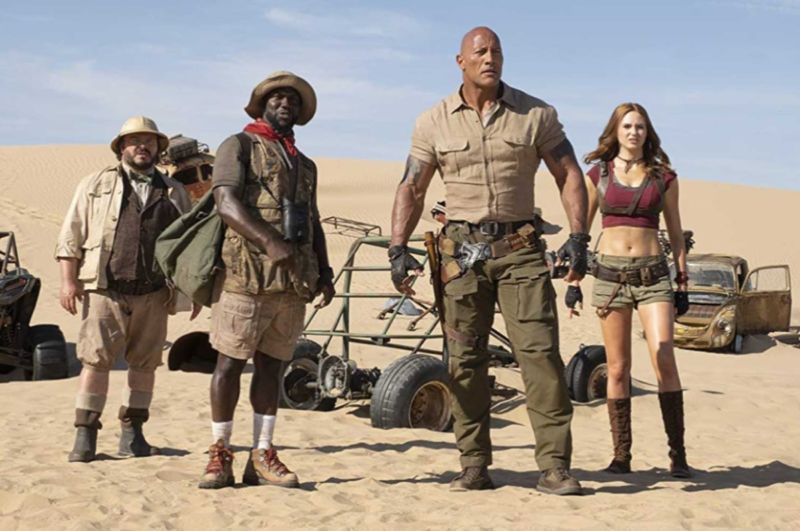 The intrepid gang of teens who played their way out of a video game two years ago is back and facing a new in-game adventure in Jumanji: The Next Level, the latest installment in the popular franchise that originated with the 1995 film Jumanji. It’s a solid sequel, following the same winning formula that made its predecessor such a big success.

(Spoilers for 1995’s Jumanji and 2017’s Jumanji: Welcome to the Jungle; mild spoilers for Jumanji: The Next Level.)

The franchise has its roots in a 1981 fantasy children’s book by Chris van Allsburg, about two children who discover a jungle adventure board game with the ominous warning, “Do not begin unless you intend to finish.” The original 1995 film adaption followed the basic premise pretty closely, although it added several characters, most notably Robin Williams as a grown Alan Parrish and his childhood friend Sarah Whittle (Bonnie Hunt). As a young boy in 1969, Alan finds a supernatural board game called Jumanji and begins to play with Sarah.

The game unleashes actual jungle hazards into the real world, and the only way to make it go away is to face down your fear and finish the game. Of course, this proves complicated: Alan gets sucked into the game and a panicked Sarah stops playing, leaving him stranded for the next 26 years. It falls to two young orphans in 1995 (another departure: in the book, their parents are still alive), Peter and Judy Shepherd (Bradley Pierce and a young Kirsten Dunst), to finish the game he and Sarah started.

Jumanji: Welcome to the Jungle (2017) updated the concept for the 21st century, turning the board game into a video game. (It is sometimes cited as the third installment in the franchise, since 2005’s Zathura: A Space Adventure takes place in the same universe and is based on another of van Allsburg’s books.)

In 1996, a disaffected teen named Alex Vreeke (Mason Guccione) is given the board game by his father, who found it on a beach. He’s not into old school board games, so the game transforms into a video game cartridge. Alex, like Alan before him, also gets sucked into the game, until four high school students discover the game 20 years later while serving detention. It was a clever twist, with the teens taking on avatars—a source of much of the film’s humor—to tackle the various levels of the game, hoping to finish before losing all their allotted three lives.

Spoiler alert: The teens succeed in mastering the game—learning some valuable lessons about identity and friendship in the process—and Fridge smashes it to make sure nobody ever gets trapped in Jumanji again. Welcome to the Jungle was a genuinely fun (and funny) film, with clever twists on the original film and plenty of sly nods to common tropes of video gameplay. The film opened with an initial weak showing at the box office; it was playing opposite an obscure art house film called Star Wars: The Last Jedi. But positive word of mouth soon boosted attendance, and the film went on to gross $962 million globally. When studios see those kinds of returns, they naturally start thinking about a sequel.

The trailer for Jumanji: The Next Level dropped this summer, promising another fun romp through the game world. A despondent Spencer, now a student at New York University, comes home for Christmas and digs out the pieces of the video game in the basement. He repairs it and once again gets sucked into the game. Seriously, did Spencer learn nothing from the prior film?

When Fridge, Martha, and Bethany come to the house to visit, they find the game running and quickly realize what happened. They resolve to go back into the game to rescue their friend—except this time they don’t have time to choose their avatars. Spencer’s crotchety grandfather, Eddie (Danny DeVito), and his elderly pal Milo (Danny Glover), get sucked into the game, too. Wacky hijinks ensue, starting with who gets what avatar.

Grandpa Eddie finds himself in Dr. Smolder Bravestone, while Milo ends up with the Finbar avatar. Martha is still Ruby Roundhouse, Fridge is now Sheldon, and when they find Spencer, he’s playing a new avatar: a master thief named Ming Fleetfoot (Awkwafina). Bethany inexplicably gets left behind, eventually enlisting the help of an adult Alex (Colin Hanks). They, too, end up in the game, Alex once again playing the pilot, and Bethany a beautiful black stallion named Cyclone. This time, the quest involves recovering another magic jewel (the Falcon’s Heart) from ruthless warlord Jurgen the Brutal (Rory McCann, aka the Hound from Game of Thrones), who killed Bravestone’s parents, per the in-game backstory.

Dwayne Johnson once again proves he has serious comedic chops.

The cast delivers strong performances, especially those playing the avatars, who must channel both their characters and the individual tics of whoever is playing those avatars. Dwayne Johnson once again proves he has serious comedic chops, deftly mimicking Danny DeVito’s vocal inflections, accent, facial expressions, and mannerisms. Sure, the life lessons each character learns are a bit too Movie of the Week—the same was true of Welcome to the Jungle—but it’s nice to see the rather bitter Eddie gradually come to terms with getting old. (“Aging is a gift. I forget that sometimes.”)

If anything, The Next Level is too similar to the 2017 film, despite bringing fresh faces and a few surprising twists into the mix. That’s partly due to the inherent predictability of video game design: there’s only so much you can do with the premise, and you know going in that the outcome will be much the same as the last time. What was an innovative reinvention in Welcome to the Jungle is now familiar, and hence less surprising. But it’s still a lot of fun, and it’s the kind of entertaining film that tends to do well in the holiday season. A post-credits scene hints at the possibility of yet another sequel. If so, let’s hope it finds a way to reinvent the basic formula one more time.

Jumanji: The Next Level opens this weekend in theaters.