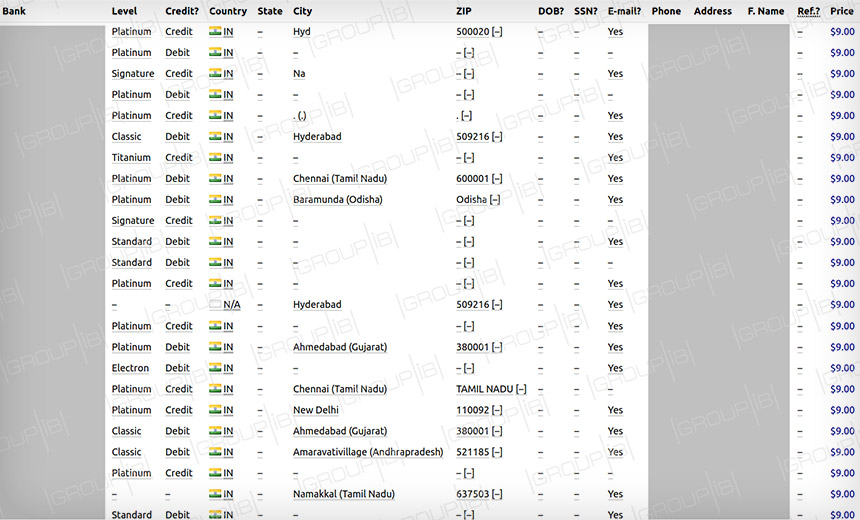 The 461,976 payment records include card numbers, expiration dates, CVV/CVC codes and, in some cases, also the full name, email, phone number and mailing address for customers, Group-IB says. Each record retails for $9, making the trove of data valued at $4.2 million.

The origin of the data is unclear, although more than 98 percent of the cards appear to have been issued by Indian banks, Group-IB says, adding that it has alerted Indian’s computer emergency response team, CERT-In, about the Joker’s Stash listing.

CERT-In didn’t immediately respond to a request for comment.

The latest Joker’s Stash dump, however, shows the cybercrime marketplace continuing to demonstrate an interest in Indian payment card data, following the October 2019 appearance of an “India-Mix-New” dump on Joker’s Stash. That particular haul comprised details on 1.3 million credit and debit card, as Group-IB detailed at the time.

Notably, the information being offered for sale last October appeared to have been stolen from cards’ magnetic stripes, suggesting that attackers had installed malware on point-of-sale devices, or else somehow exfiltrated card data from an environment with POS terminals, he says.

But the dump that posted this week contains “fullz,” which is carder-speak for records that contain full packages of personally identifiable information. In this case, that means not just card numbers but also various types of PII were stolen, which suggests that the data was likely stolen from e-commerce sites that would have been gathering this full array of information. “This type of data is likely to have been compromised online – with the use of phishing, malware or JavaScript sniffers,” Shestakov says.

Last year, Group-IB reported that it had counted 38 JS-sniffer families. But last month, the firm said that figure has nearly doubled.

Magecart isn’t a stand-alone crime group, but rather an umbrella term that refers to the use of these types of tools, which appear to have been traded or disseminated among crime gangs since 2014 (see: Magecart Group Continues Targeting E-Commerce Sites).

Since 2018, the number of Magecart groups has surged, with at least 12 groups now at work, according to researchers. Victims of Magecart-associated groups have included shoe manufacturer Fila, bedding sites Mypillow.com and Amerisleep.com, as well as British Airways, Ticketmaster and Newegg (see: RiskIQ: Magecart Group Targeting Unsecured AWS S3 Buckets).