How the Defense Department is reorganizing for information warfare

America’s adversaries have targeted the military’s weaknesses via information warfare in recent years and as a result the Department of Defense has made a series of moves to reorganize and better defend against such threats.

While each service is undertaking a slightly different approach toward information warfare, Defense officials have said there is a broad buy-in to a larger vision of how to fuse capabilities and better prepare to fight. Collectively, they show the breadth of the movement.

Here are several ongoing efforts within the services and the Pentagon underway.

Upon assuming the service’s top officer in December, Chief of Naval Operations Adm. Michael Gilday issued a fragmentary order outlining a variety of tasks for the Navy. Included in this order was a direction that the Navy will pilot a dedicated information warfare cell within a maritime operations center at Large Scale Exercise 2020 to more effectively execute space, electronic warfare, information operations and special operations forces into all-domain operations.

Large Scale Exercise has been put on hold until next year due to the ongoing pandemic.

Gilday explained that the results from the exercise will refined the requirements and timeline for these IW cells in all fleet maritime operations centers as part of the budget for 2022.

Gilday also required the Navy to develop a plan to field small tactical cyber teams for fleet cyber commanders, however, that also is still forthcoming.

The Army’s primary arm for cyber operations has been working to reorganize and change its name. 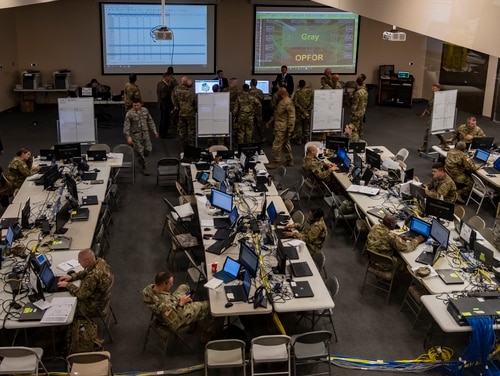 The tactical manifestation of this name change will exist with the 915th Cyber Warfare Battalion, a relatively new unit consisting of 12 teams that support brigade combat teams or other tactical formations. These “fly away” teams, as some officials call them, would help plan tactical cyber operations for commanders in theater and unilaterally conduct missions in coordination with forces in the field.

The Army has already activated its first two companies under the 915th in the last year and plans to create another within the next year.

On the capability side, the Army is continuing to field its first organic brigade information warfare capabilities. These include the Multi-Function Electronic Warfare Air Large, the first organic bridge aerial electronic attack asset, which is also capable of cyberattacks pod mounted on a MQ-1C Gray Eagle drone, as well as the Terrestrial Layer System Large, the first ground based integrated signals intelligence, electronic warfare and cyber platform.

The Army recently awarded a development contract to Lockheed Martin for MFEW and plans to equip units in 2022.

The TLS is currently in the prototyping phase with two companies competing for the contract. The Army aims to equip units in 2022 as well.

While the new entity reached fully operational capability this month, there is still more work to be done in getting the right personnel in place and continuing to integrate the disparate entities that existed separately before.

Specifically, 16th Air Force’s commander Lt. Gen. Timothy Haugh said an information warfare cell that will be tied closely with the air components at European and Indo-Pacific Command has been assigned but that leaders still need to hire personnel.

Additionally, he noted during a July 15 event hosted by the Mitchell Institute that the 16th will be partnering with their parent entity Air Combat Command to create a spectrum warfare wing.

These forces are still participating in exercises to better refine structures and concepts.