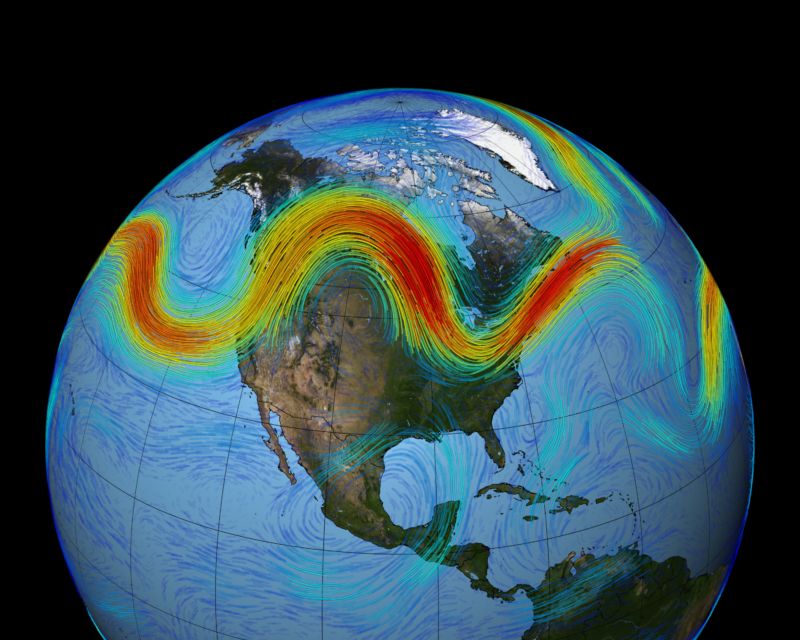 Summer 2018 saw some notably extreme weather in multiple locations around the Northern Hemisphere. There were heatwaves in the Western United States, Western Europe, the Caspian region through Siberia, and Japan as well. That’s not necessarily interesting on its face, as there’s always weird weather going on somewhere. But this was not a coincidence, as all these events were physically linked by the physics of the jet stream. It’s a linkage that could contribute to a crisis for food production.

The Northern Hemisphere jet stream is a band of strong winds that marks a boundary between cold Arctic air and warmer mid-latitude air. As the jet stream slides farther north or south, it brings changes in temperatures with it, via the cold and warm fronts that can bring rain.

The jet stream’s path can range from a neat, east-west stripe around the planet to lazy meanders that form serpentine shapes. Large meanders tend to move slowly, setting the stage for extremes like heatwaves (or cold rain in the next meander over). These meanders are affected by the location of continents and oceans, as well as by wind patterns around mountain ranges. Because these locations are fixed, there are some common positions for jet-stream meanders that occur over and over again.

A new study led by Kai Kornhuber at Columbia University found that things form at these locations when the jet stream has five or seven meanders in its path around the world, but not for six or eight meanders. In a five-meander pattern, for example, the northward bends (called “ridges”) tend to set up over the middle of North America, Eastern Europe, and Eastern Asia at the same time. In these ridges, warm air is pulled northward, and warm, sunny conditions prevail because of high air pressure—the recipe for a heatwave.

In the seven-meander pattern, the ridges shift toward Western North America, Western Europe, Western Asia (around the Caspian Sea), and Central Asia.

The researchers identified these patterns using wind data from the last few decades but also by looking for heat extremes. That showed that heat extremes are much more likely in some of these areas during five- or seven-meander jet streams. In central North America, for example, 45 out of the 520 weeks of summertime data had a five-meander pattern. The probability of a heatwave in those 45 weeks was seven times greater than at other times.

Does climate change fit into this? That’s not easy to answer. Increasing temperatures mean that heatwaves are more extreme than they used to be regardless of the jet stream’s behavior. But the influence of climate change on the jet stream is genuinely debated. Some studies see a link and project an increase in meandering behavior, but untangling human-caused changes and natural variability has been particularly difficult on this question.

In this case, the dataset used doesn’t show a statistically significant increase in five-meander or seven-meander patterns since 1978. But it does show an impact on agriculture. The researchers also checked their data against crop production in these regions, noting an average drop of four percent in summers with more than one of these events.