The Air Force’s new information warfare command will open an operations center in March as part of a broader effort to better integrate the service’s information-related capabilities.

16th Air Force/Air Forces Cyber, created in October, combined 24th and 25th Air Force and placed cyber, intelligence, surveillance and reconnaissance, electronic warfare and weather capabilities under one commander. Now, officials are learning how to use those information warfare capabilities to solve problems for air component commanders as well as combatant commanders. 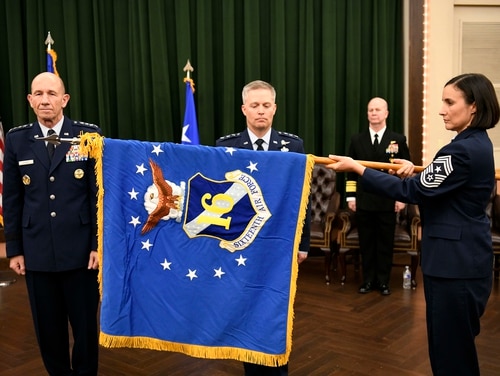 “We did a very detailed analysis of what are all the existing authorities we already have, what are all of the problems our units are working across the globe and now what we’ve spent our time doing is how do we align those units that are working on the same problem,” Lt. Gen. Timothy Haugh, commander of 16th Air Force, told reporters at the Air Force Association’s air warfare symposium Feb. 28.

The glue that holds these capabilities together will be a new operations center that will open March 16, he said.

“First, we start there; what intelligence resources are we applying to that problem? Then, we likely have one of our elements of the targeting enterprise also working the same problem. We will likely also have a reconnaissance and our airborne ISR units working on a similar problem,” he said. “How do we begin to connect those dots? That’s probably been the area we’ve been very deliberate is to ensure that as we connect dots across those units that are working on similar problems to ensure we’re doing it in concert with our policies, laws and oversight.”

Leaders will also determine if cyber capabilities and authorities would help.

In addition to the operations center, Haugh also pointed to an information warfare cell, an organizational element within 16th Air Force’s headquarters that will be the “integration point for the outcomes” that the command’s officials suggest. For example, leaders may decide to employ its public affairs arm to disclose what adversaries are doing publicly or it could turn to its cyber team or it could push data to a commander to allow processes to be more effective.