A slew of new National Guard personnel are cycling into a major cyber task force for U.S. Cyber Command.

In a February ceremony, the Army welcomed new units into the task force, according to releases from the Department of Defense. Since being created three years ago, over 450 Army National Guard soldiers have been assigned to the task force.

In a February cermony, the Army welcomed new units into the task force.

“The soldiers before you are the warriors of the 21st century, and they bring skills and expertise that are changing the face of modern warfare,” Col. Brian Vile, commander of the 780th Military Intelligence Brigade, said of the two battalions during a ceremony. “Their skillful execution of their technically demanding tasks under both USCYBERCOM’s and the brigade’s ability to perform their assigned missions.”

The National Guard is considered a critical resource for the DoD’s cyber bench considering many personnel serve as cyber or IT professionals in their day jobs. 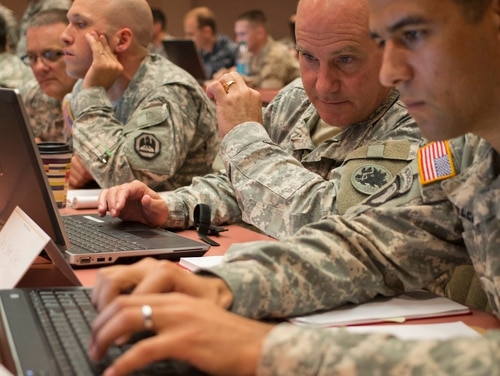 “The decision to utilize the dedicated, experienced, and technically skilled members of the Guard in this capacity clearly demonstrates the integral role the National Guard plays in the defense of our nation,” Vile said. “What is less obvious is that the unique skills and viewpoints they bring to the fight are the critical catalyst that ensures continued momentum from potential to demonstrated capability.”

Through what’s called the State Partnership Program, National Guard units from a particular state partner with a foreign nation, whose geographic size and military size roughly match the size of the state the Guard unit comes from.

The Guard has also been thought of a major resource to help with defending the local elections in the states they reside.